Moon Seen From Detroit and Sydney- Proof of Flat Earth?

This is what I was able to come up with for my observation with my friend in Australia. not seeing how this would be possible on a globe but I'm open to anything you got. pic.twitter.com/g2Uws9u0cH
— Free_Thinker (@FreeThoughts182) December 30, 2018 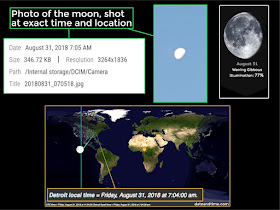 And time of Sydney observation was clarified as 7:52 am:

First let's check the Moon Light World Map, this shows the moon would NOT have risen yet in Sydney.  Moonrise would be at 22:00 hours in Sydney so FreeThoughts182 clearly has the time wrong.  I'll bet it's closer to 8:52am. 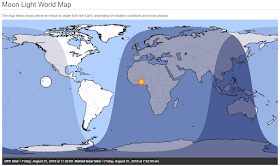 Next we will check Stellarium, the astronomical calculation software, showing just after moonrise at 22:05.  Which confirms this.  And yes, I absolutely trust this over the word of a Flat Earther who cannot produce any evidence of their claim.  I do NOT think he is lying but I do think he is mistaken about the time or maybe the date. 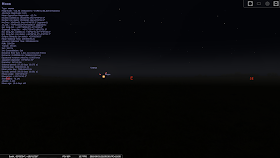 But the important question here is "can Sydney and Detroit both see the moon at the same time given the Globe model" -- not what exact time did this occur.  That question is best answered by using Celestia (a 4D model of the solar system, and more, that allows us to view this from any viewpoint) to view the planetary arrangement.

First, set the date and time: 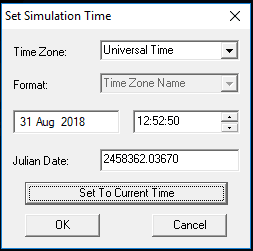 And then we Select the "Moon" and hit 'g' to Goto that object.

Next Select the "Earth" and hit 'c' to center that in our view.

We can see both Sydney and Detroit from the Moon. 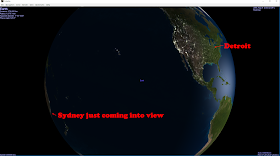 and an hour later the Moon would be significantly in the sky for both locations. 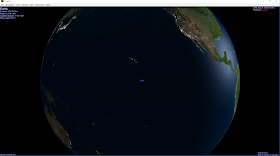 So yes, both Sydney and Detroit SHOULD be able to see the Moon in the sky at the same time.

In fact, on a Globe with an atmosphere that bends light about a half-degree and a sufficiently distant Moon, like ours, there are no two locations on Earth that couldn't see the Moon at the same time under the right conditions -- of course, antipodes will both see it very close to the horizon.  But Sydney and Detroit aren't even close to antipodal.

With better evidence of the two locations and timestamped images we could do a better job predicting what both persons would see down to the exact phase of the moon, the azimuth and altitude where it appears in the sky, etc.

And one last view showing where the Sun appears in the sky and just how far away from the Earth it is even though we only see a crescent Earth, that slight angle plus a great distance means the angle is fairly large (about 32 degrees). 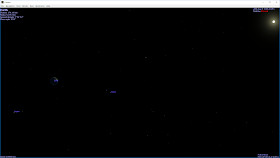