Essential Elements of the Globe Model

I created this to establish a baseline of the Globe/Heliocentric model for discussions.

When Flat Earthers make assertions that disagree with this model they are being dishonest.

You don't win an argument when you create a strawman of the Model -- you LIE.


You can get the current axial tilt from timeanddate.com

And in "meme" form for sharing (minus the big Refraction Discussion) 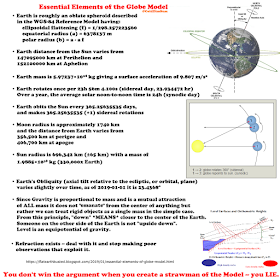